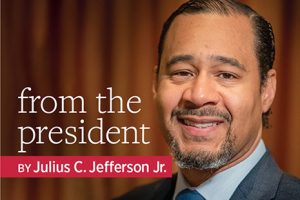 As a career federal employee, I took an oath of allegiance to the US Constitution, which begins with three words that are the bedrock upon which our country stands: We the People. To me, it means the government exists to serve all citizens of this experiment called the United States of America. And yet we know that when the Constitution was penned in 1787, ratified in 1788, and in effect after 1789, We the People did not include all the people.

The primary focus of my ALA presidency is to serve the people—all people—with particular attention to those who were not included or who are underrepresented or forgotten.

In my last column, I shared the idea behind ALA’s “Holding Space” tour, which began in July and featured virtual visits to 11 libraries across the country that serve the people, highlighting communities that have too often been voiceless.

The goal was to listen and accept the truth, reality, and experiences of library workers and the communities they serve. A major part of the success of “Holding Space” was rooted in our relationships with ALA chapters, state libraries, affiliate organizations, and the local people we visited virtually in amazing communities across the country. We discussed each community’s specific needs while connecting ALA’s strategic priorities with community leaders and elected officials at all levels of government. Our online travels were led by our incredible ALA staff, notably our virtual tour bus crew from ALA’s Public Policy and Advocacy Office.

Here are takeaways from the tour:

Libraries need our help. If they lack resources to serve all people, this American experiment fails. In 2020, this year of crisis, do we have 20/20 vision for our future? With so much division and turmoil in the world, we as a people must move forward together.

The work of our Association is at a crossroads as well. ALA staff and members have been considering the Association’s future governance structure, constitution, and bylaws for the past few years, led initially by the Steering Committee on Organizational Effectiveness (SCOE). We now have a new working group under the direction of Council called Forward Together. The group will facilitate discussions regarding SCOE’s recommendation to the ALA Executive Board. This phase will lead Council to a constitutional convention aimed at structuring ALA for long-term success and sustainability.

Our role as ALA members is to advocate for library services and library workers, ensuring access to information for all. Our mission can be successful only when everyone is included in We the People.