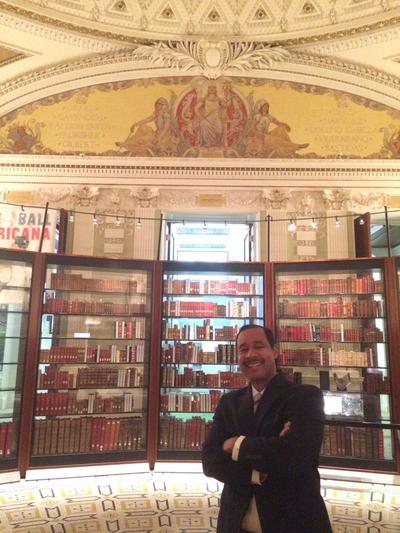 My Journey (part 2.1) – Connections that Bind

To BIND; to tie or fasten tightly

From the age of 16, I have had a connection to the Library of Congress (LC). It was at that age that my affiliation with LC began, or so I thought.

My first job was as a work study student in the Congressional Research Service (CRS), the division of LC exclusively mandated to provide research and policy analysis for Members of Congress, congressional committees and their staff. It was an experience that awakened me to the invaluable contributions of librarians and researchers. During my college days I returned and worked as a deck attendant, shelving and retrieving books  for LC patrons. After receiving my MLS and a stint at Howard University’s Founders Library, I again returned to LC— this time as a librarian. For many reasons LC has always felt like home to me and librarianship my calling.

I will always be thankful to my father, an archivist, for instilling in me an appreciation and enjoyment of research. As we embarked on an investigation of our ancestral past we discovered an even deeper link to LC; a link tied to the early years of the founding of this federal republic.  We were able to trace our lineage back to colonial Virginia in the early 1700’s. We discovered that my paternal grandmother, Ida Mae Hughes, was a descendant of Elizabeth Hemings the matriarch of the Hemings family of Monticello.  In fact, I descend from Betty Brown who was Elizabeth’s third child.  Many of my ancestors played peripheral roles in the creation of our country, as enslaved people on the plantation of our third President and author of the Declaration of Independence, Thomas Jefferson. I will share two stories that bind me historically to the Library of Congress.

Jupiter Evans, my seventh great-grandfather was Thomas Jefferson’s personal valet and later coachman. On one occasion when Jefferson became ill and was unable to complete the journey to the Virginia Convention at Williamsburg in July 1774, he gave Jupiter Evans the task of delivering to the Convention copies of A Summary View of the Rights of British America, the precursor to the Declaration of Independence. Today this document resides in the Library of Congress as part of the Jefferson Exhibit collection.

When Thomas Jefferson ceded his vast personal collection of books to the Library of Congress to replace the holdings in the Capitol that were burned by the British in 1814, he directed my 6th great uncle, John Hemings, a skilled joiner, to make additional boxes to transport the books, while his butler, my 5th great uncle Burwell Colbert, packed the books for the 120 mile trip to the U.S. Capitol and a newly restored LC.

As a teen working at LC, I never imagined that what literally bound me to LC was a seminal document written by Thomas Jefferson, delivered by my ancestor to Williamsburg; and books from his personal collection that my ancestors helped transport from Monticello to Washington, D.C. It humbles me to know that generations later, I find myself surrounded by the contributions of the Evans, Hemings and Colbert families from which I descend-people who in some small way contributed to the advancement of Jefferson’s declaration and the birth of this nation.

Equally, I am sure Thomas Jefferson never imagined that the 7th great grandson of the matriarch Elizabeth Hemings would find his career calling at the Library of Congress and standing as a candidate ready to serve as ALA President. My Jeffersonian journey which began with my Hemings ancestors of Monticello, and culminates with my career at the Library of Congress. These links bind me to the institution. Even more astonishingly, by serendipity or kismet, these links have resulted in a commitment to Librarianship and a tradition of service.

One thought on “My Jeffersonian Journey #2.1”